Christmas Decorations People Used to Use

Home/Articles/Christmas Decorations People Used to Use

Christmas Decorations People Used to Use

From our Editor… Christmas Decorations People Used to Use

I couldn’t help thinking about some of the old Christmas decorations that few people in their right minds would use today.  Of course, I grew up back in the days when if you broke a thermometer, you got to play with the mercury—bare handed, no less.  How fun it was to watch the mercury ball rolling on the floor or kitchen table.  Our sense of personal risk was certainly lower than it is today.

The most dangerous Christmas tree decorations must have been real candles.  I recall our burning them at home, although such a display was watched closely.  Lighting candle on a tree that had been drying out for several days was very risky indeed.  I’ve been told that dried-out needles can burn so hot and fast that in less than a minute, draperies and furniture across the room will quickly burst into flames.  Thankfully, water-bearing tree stands and electric lights became popular and reduced the threat of the tree catching fire.

The light bulbs we eventually used screwed into sockets, and were wired in a series, so that if one went out, you had to keep changing out the bulbs in the strand until you found the bad one. (we can all remember that frustration!)

When I was growing up, things were put on the Christmas tree in a certain sequence: the lights, then the garland, then the ornaments, then the “icicles.”  We reached into the very bottom of the decoration box and pulled out pieces of card board on which the icicles were draped.  They served as “frosting” on the cake, so to speak. 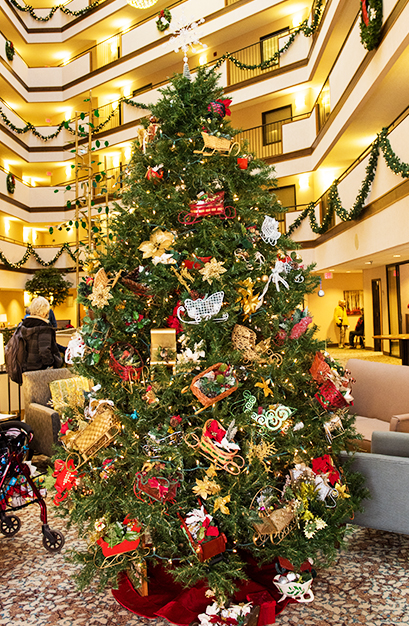 Nokomis Square Cooperative offers apartment style senior living in the Lake Nokomis area of South Minneapolis, MN. With a variety of features and amenities on site, many nearby conveniences, and exceptionally maintained senior housing units, you’re sure to find activities and comforts to enhance your daily living. Contact us today for more information!